Have you ever heard of an ancient Babylonian god named Tammuz? If you are familiar with Nimrod from the Bible then perhaps you have. Tammuz is the son of Nimrod and Semiramis. If you have been reading my posts about the Batman vs Superman movie then you will find some interesting connections I have made to ancient Babylon. I have discussed Nimrod and Semiramis at length. It just wouldn’t be a pagan party without the son of Semiramis. That would be Tammuz! Can you guess who represents Tammuz in this movie? If you guessed Superman then you are correct. This post will explain further occult meaning in this movie.

Several things about Superman are interesting in this film. It is common knowledge that Superman is meant to be Jewish. I like to think of the traditional Superman as the Messiah figure that the Jewish people were “expecting”. The Jewish people in the time of Jesus expected the Messiah to come flying onto the scene with super strength and x-ray vision basically to punch the Romans in the face. One of the big reasons the Jews rejected Jesus as the Messiah was because Jesus preached a message of peace. Consider the following scripture to make my point on this. When Jesus was asked by the Pharisees if the Jews should pay taxes to Caesar they wanted a resounding “NO”. The answer Jesus gave the Pharisees was quite the opposite. Render unto Caesar what belongs to Caesar and render unto God what belongs to God (Matthew 22:16-22). Jesus gave the message of peace instead of advocating war with the Romans. Indeed Superman was more the Messiah that the Pharisees were expecting.

There is a scene in this movie where Superman saves a girl from a burning house on Dia De Los Muertos. Now today Dia De Los Muertos is celebrated on Halloween around or near October 31st – but not originally. Originally the Dia De Los Muertos was celebrated in the beginning of summer. What Hebrew month falls in June – July when the beginning of summer falls? Also known as the summer solstice? The “Hebrew” month of Tammuz. Even though a month is named Tammuz in the Hebrew calendar it is actually a Babylonian name. The Jewish calendar has been tainted to some degree by time spent by the Jewish people in captive in Babylon. So that is one general hint to Tammuz.

The second obvious connection is Superman’s death in this movie. More specifically the funeral. Spoiler alert. A villian named Doomsday kills Superman at the end of this movie. There is an elaborate funeral for Superman. Tammuz is mentioned once in the Bible. It is for the mourning of Tammuz …

Then he brought me to the door of the gate of the Lord’s house which was toward the north; and, behold, there sat women weeping for Tammuz.

Then said he unto me, Hast thou seen this, O son of man? turn thee yet again, and thou shalt see greater abominations than these. – Ezekiel 8:14-15

Did you know that to honor the death of Tammuz there is an elaborate funeral that last six days? The the death of Superman is elaborate in this movie. It could easily be a six day event. Have a brief look at this quote from the Tammuz Wikipedia page …

Beginning with the summer solstice came a time of mourning in the Ancient Near East, as in the Aegean: the Babylonians marked the decline in daylight hours and the onset of killing summer heat and drought with a six-day “funeral” for the god. – Tammuz Wikipedia Page

I am sure everyone is truly shocked that a six day funeral holiday for an ancient Babylonian pagan god coincides with the summer solstice. Read Ezekiel 8:16 or Jeremiah 8:2 or Deuteronomy 17:3 to understand what the bible says about sun worship. Think sun salutation in yoga. Or the monstrance used by the Catholic pope. It is good to become aware of sun worship so that you can avoid it.

Finally we see that upon Superman’s death in this movie is a subtle symbol. There appears a cross in the ashes as Superman has tasted death. It has to be a Christian cross, right? Now Superman is Jesus? Not so. The symbol of the cross was also associated with Tammuz in ancient Babylon. This can be a snare. Many people make the assumption that Tammuz pre-dates Jesus and thus Jesus is imitating Tammuz or that Jesus is a reincarnation of Tammuz. I won’t deny that some churches very much blur that line but I want you to remember something. Jesus beheld Satan being cast down like lightning. I explain this in my post called Pagan Things. The point is per the words of Jesus himself that the Messiah pre-dates Tammuz. Yet it cannot be denied that a symbol of Tammuz was the cross. That point is fair enough and it is represented in this movie in this screenshot … 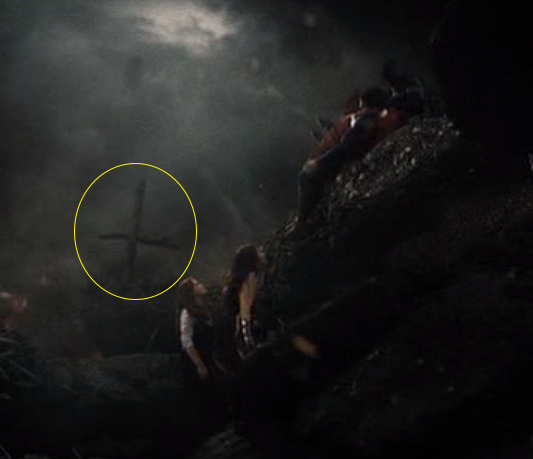 What do I think is going on here? Well, Lucifer has been watering down the message of the life of christ for centuries. If Lucifer can put into place pagan gods to mimic or water down the life of Jesus through the generations then he will do so. Do not be fooled into believing Tammuz was the inspiration for Jesus. That is my take on this false doctrine.

Perhaps I still have not presented enough to make the Superman to Tammuz connection. Fair enough. Here is more. In this movie the name of Batman’s mother is Martha. What are the odds? Superman’s mother is also named Martha. Here is an ancient Babylonian fun fact. Did you know that Nimrod married his own mother which was Semiramis? Semiramis is also the mother of Tammuz. And so Nimrod’s mother and Tammuz’s mother share the same name. Truly shocking. And now we are told that Superman and Batman’s mother share the same name. All signs point to Babylon – especially combining these observations with my Wonder Woman post and my Batman post.