In a previous post I analyzed the Snoop Dogg music video California Roll. Now I do not have a vendetta against the man but I was shocked by Snoop’s endorsement of the Thelema religion in California Roll. Something prodded me to go back and look at some of Snoop Dogg’s old school music videos. And when I did I found something startling. I came across the “Murder Was The Case” short film / music video made way back in 1995. Now as I have stated before I do have hip hop knowledge. With that said I have never seen the Murder Was The Case short film before. And if I did I was very young when I saw it. I could have watched this as recently as 7 years ago and still been clueless. This is how naive and brainwashed I was. You shouldn’t make the same mistake.

The “fictional” Murder Was The Case short film starts out in JC’s apartment (JC is Eddie Murphy’s older brother and now famous comedian Charlie Murphy of all people!). JC overhears his girlfriend conversing with Calvin Broadus (Snoop Dogg) on their affair behind JC’s back. JC listens in on the phone call. Now he wants revenge. He wants to kill Snoop Dogg in a shootout – and he does. It is not lost on me that the person who wants to kill Snoop Dogg is nicknamed “JC” (pretty obvious Jesus Christ reference and pretty obvious blasphemy constructed by Snoop Dogg and / or Dr. Dre). Here is the youtube video …

Here are the lyrics …

As I look up at the sky/
My mind starts trippin, a tear drops my eye/
My body temperature falls/
I’m shakin and they breakin tryin to save the Dogg/
Pumpin on my chest and I’m screamin/
I stop breathin, damn I see demons/
Dear God, I wonder can ya save me/
I can’t die Boo-Boo’s bout to have my baby/
I think it’s too late for prayin, hold up/
A voice spoke to me and it slowly started sayin/
“Bring your lifestyle to me I’ll make it better”/
How long will I live?/
“Eternal life and forever”/
And will I be, the G that I was?/
“I’ll make your life better than you can imagine or even dreamed of/
So relax your soul, let me take control/
Close your eyes my son”/
My eyes are closed/

I’m fresh up out my coma/
I got my momma and my daddy and my homies in my corner/
It’s gonna take a miracle they say/
For me to walk again and talk again but anyway/
I get, fronted some keys, to get, back on my feet/
And everything that nigga said, came to reality/

No one ever talks about a short film / music video where Calvin Broadus sold his soul to the devil to become the famous Snoop Dogg. You would think it would come up in conversation on conspiracy websites – but I have never heard anyone mention it or write about it. The opening credits tell us a lot. They say “Gregory S. Cummins as The Devil”. There is no mistake this is meant to be the devil. Also super important. This short film was produced AND directed by Dr. Dre. He strikes the piano key at 12:51 of the short film. He is in it. He wanted to produce it. He wanted to direct it. He wanted to be in it. I can only deduce that he loves everything about it. Shortly after thinking about this I connected some unfortunate dots. I thought of Dr. Dre’s son Andre Young. I couldn’t help make the connection. Andre Young is no longer with us (deceased at age 20 in 2008). Are you jumping to conclusions like I am? I won’t say with conviction that the death of Andre Young is the price Satan demands. I will say it isn’t crazy.

My point is Murder Was The Case contains truth in the fiction. Truth that Calvin Broadus had no problem with a short film depicting himself selling his soul to the devil. Truth that Dr. Dre has no problem with it as well. Truth that this short film contains real life blasphemy (as a society we are not used to recognizing blasphemy and I will point it out below). Truth that Andre Young is deceased. Truth that Calvin Broadus really is dead to the public (we all know him as Snoop Dogg). Truth that Snoop Dogg is alive and Tupac Shakur is dead. Is there a connection between Snoop Dogg’s life and Tupac’s death? I have an interesting theory about that which I will post in the future.

Beyond these things I think there is more truth to find. Consider the following …

1) At 13:10 of the Murder Was The Case short film Snoop Dogg breathes in the spirit of Satan like smoke … 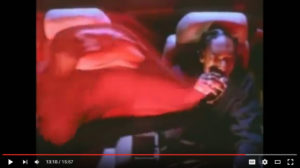 Now follow me because this is astonishing. Fast forward 20 years later to the music video California Roll which I wrote about in-depth. Snoop Dogg repeats the exact same ritual when he shows a “hieroglyphic” diagram showing a young woman how to breathe in the Egyptian god Anubis and then he performs the ritual to the young woman in the crowd. This is not by accident … 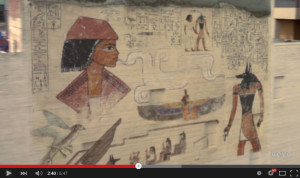 Isn’t it a little bit coincidental that in 2 separate music videos Calvin Broadus breathes in Satan and 20 years later he teaches a young woman how to breathe in Anubis? Not to those of us familiar with the Thelema religion and the Torah (and by all means you should be). Let me explain. The Age of Horus (which is the same thing as the Age of Aquarius) began on December 21st 2012. The Thelema religion wants to usher in a New Age – the Age of Horus (where Horus is an ancient Egyptian god). Snoop is showing us the old dog has learned new tricks. Today he worships Egyptian gods in the same fashion he worshiped Satan 20 years ago. He breathes them in (possession). Once you understand the Thelema religion you will come to know it is one in the same with devil worship. They are simply two different styles. How do we know that Egyptian gods are devil worship? How do I make that leap? The God of Abraham told us himself in the Torah …

And God spake all these words, saying,

I am the Lord thy God, which have brought thee out of the land of Egypt, out of the house of bondage.

Do you really think it is just coincidence that right before the God of Abraham says “Thou shalt have no other gods before me” there is a mention of Egypt? At the very least this coincidence reminds us not to worship the Egyptian gods (as if you really need reminded of that).

2) This is another significant screenshot from this short film. Look closely at this screenshot of Snoop Dogg praying. This is unbelievable. They actually put an upside-down cross on the wall. If you do not know an upside-down cross is a satanic symbol to represent the rejection of Jesus as defined on the Church of Satan website itself (I do not care to link to it) … 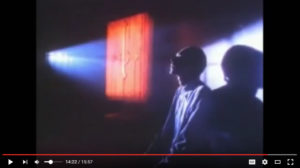 3) There are scenes in this short film where the devil and Jesus are combined to be the same lord. To declare that Satan and Jesus are the same is brazen blasphemy. This is what blasphemy looks like! In artistic and blasphemous fashion Calvin Broadus chose Satan to be his savior. Dr. Dre produced it and directed it and participated in it. One has to seriously wonder who he worships too. And I sincerely hope comedian Charlie Murphy was just too young and naive to realize what grave transgressions were happening around him – but I doubt it.