Today I am going to reveal to you a new conspiracy concerning the Statue of Liberty. I have been reading Rob Skiba’s book Babylon Rising. The Babylon Rising book is teaching me about occult symbolism in America. I must admit I had a rather naive opinion of the American Founding Fathers before reading this book. Basically I erroneously assumed that since Mr. Adam Weishaupt is credited with establishing the Illuminati around 1776 that there was not enough time for the Illuminati to influence the early USA Founding Fathers. Silly me. Freemasonry itself traces its roots back to Ancient Babylon!

After reading Babylon Rising I have a much better understanding of what happened in early America. This got me thinking about symbols of America. I have some unique things to say about the Statue of Liberty. Also I have a brand new conspiracy to share with you about it.

A background on the history of the Statue of Liberty …

The Statue of Liberty (Liberty Enlightening the World; French: La Liberté éclairant le monde) is a colossal neoclassical sculpture on Liberty Island in New York Harbor in New York City, in the United States. The copper statue, designed by Frédéric Auguste Bartholdi, a French sculptor, was built by Gustave Eiffel and dedicated on October 28, 1886. It was a gift to the United States from the people of France. The statue is of a robed female figure representing Libertas, the Roman goddess, who bears a torch and a tabula ansata (a tablet evoking the law) upon which is inscribed the date of the American Declaration of Independence, July 4, 1776. – Statue of Liberty Wikipedia

The project is traced to a mid-1865 conversation between Édouard René de Laboulaye, a staunch abolitionist and Frédéric Bartholdi, a sculptor who was inspired by an 1855 visit to Egypt and admired the colossal statues on the facade of the Abu Simbel temples. – Statue of Liberty Wikipedia

Bartholdi and Laboulaye considered how best to express the idea of American liberty. In early American history, two female figures were frequently used as cultural symbols of the nation. One of these symbols, the personified Columbia, was seen as an embodiment of the United States. – Statue of Liberty Wikipedia

The other significant female icon in American culture was a representation of Liberty, derived from Libertas, the goddess of freedom widely worshipped in ancient Rome. – Statue of Liberty Wikipedia

These quotes on the Statue of Liberty Wikipedia page are insightful. But they do not tell the entire story. You see Libertas wasn’t just worshiped in Rome. She found her way onto The Great Seal of France in 1848. Also known as Marianne.

Now Frédéric Auguste Bartholdi was a French artist. He was a Freemason who loved Egyptian monuments. This is not according to me. It is according to the official park service page!

The original design of “Liberty Enlightening the World” wasn’t even intended for the United States. The original design was for a colossal statue of a woman holding a torch in Egypt – but it got turned down. Many people know these things. Here are things most people do not know.

The Libertas goddess explanation is provided as “factual” on the official Statue of Liberty Wikipedia Page. For sure it is an abomination to Christians. I am specifically reminded of Leviticus 26:1. There are many more Bible passages concerning this. I encourage you to learn what paganism is so that you can identify it when you see it.

Speaking of paganism – have you ever tried a google image search for “Hecate” or “Hekate” or “Hecate figurine” or “Hekate art”? I suggest you do. The spikes on the tiara. The torch. Ladies and gentlemen the Statue of Liberty looks like Hekate the goddess of witchcraft. Do you know how very few Americans know this? Now you do.

If the Statue of Liberty looking like the Ancient Greek Witch Queen isn’t earth shattering enough for you then don’t worry there is much more. Are you familiar with the ancient goddess Semiramis aka Ishtar? She was queen of Ancient Babylon. That is a key connection I will make in this post. If I can make that connection from Statue of Liberty to Ishtar then I can show you a wild conspiracy.

And upon her forehead was a name written, MYSTERY, BABYLON THE GREAT, THE MOTHER OF HARLOTS AND ABOMINATIONS OF THE EARTH. – Revelation 17:5 KJV

This would be a strong connection between Lady Liberty and the Mother of Harlots. However I am having a hard time finding the exact text where Cicero says this. I need more proof. I found more proof at the Ishtar Gate …

The Ishtar Gate was the eighth gate to the inner city of Babylon. It was constructed in about 575 BCE by order of King Nebuchadnezzar II on the north side of the city. It was excavated in the early 20th century and a reconstruction using original bricks is now shown in the Pergamon Museum, Berlin. – Ishtar Gate Wikipedia

The Ishtar Gate helps me establish a better correlation to Ishtar. Consider the Statue of Liberty at Ellis Island is considered “The Gateway to America”. Ishtar Gate? Gateway to America? Pay attention to the pedestal on which Lady Liberty rests. That is a key to understanding. Have a look at a painting of the Ishtar Gate to hammer this home. Hint. Look on the wall … 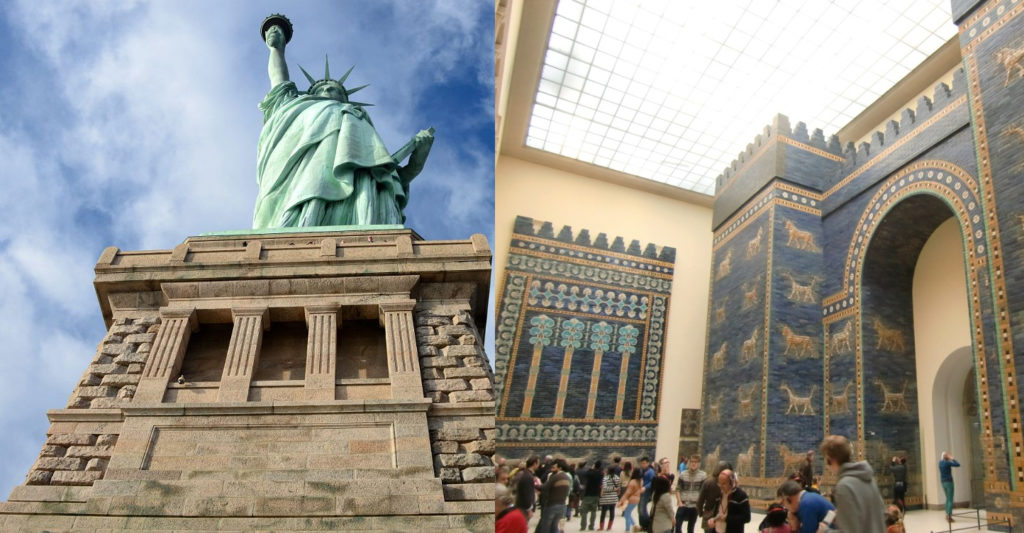 There is more. Do you recognize “The New Colossus” poem?

“The New Colossus” is a sonnet that American poet Emma Lazarus (1849–1887) wrote in 1883 to raise money for the construction of the pedestal of the Statue of Liberty. In 1903, the poem was engraved on a bronze plaque and mounted inside the pedestal’s lower level. – The New Colossus Wikipedia Page

Circle back to Emma Lazarus. Do you know any of the other poems by Emma Lazarus? I do. Her last poem is entitled “By the Waters of Babylon”. Please note the obvious that the Statue of Liberty is by the waters. Is Emma – the person who helped fund raise for the statue’s completion – calling America Babylon? Emma is known as a faithful Jew in many historical references. What faithful Jew writes a fund raiser to erect a giant pagan goddess statue? A very confused one to say the least.

At this point if I have linked Lady Liberty to Babylon to Ishtar to your satisfaction then we can link her to Astarte. Consider the Astarte Wikipedia Page. It tells us Astarte is the Hellenized version of the goddess Ishtar. In plain English they are the same goddess.

If you look up the word “grove” in e-sword (e-sword is free software that provides Hebrew definitions of words found in the KJV Bible) you will find that in the KJV the word “grove” means “Asherah or Astarte – a Phoenician goddess – also an image of the same”.

In the NIV version of the Bible the word “grove” is translated slightly different on occasions. It is sometimes translated as what is called an “Asherah pole”.

I now propose that the Statue of Liberty is a giant Asherah pole as described as an abomination in the Old Testament.

Do not set up any wooden Asherah pole beside the altar you build to the LORD your God – Deuteronomy 16:21 NIV

He took the Asherah pole from the temple of the Lord to the Kidron Valley outside Jerusalem and burned it there. He ground it to powder and scattered the dust over the graves of the common people. – 2 Kings 23:6 NIV

I prefer the KJV Bible but there are times the NIV version is very useful! If you look at the Statue of Liberty you will notice that near her feet the robe resembles a tree trunk. The statue appears such that she totally *could* be carved out of a single (yet giant) tree. Even the angle at which she holds the torch is extraordinarily parallel – much like a pole. From torch to toe the Statue of Liberty resembles a pole.

I understand she isn’t made of wood. She is a symbol of many occult things and many ancient goddesses and no Christian things. If she is an Asherah pole it is some of the largest news in American history. Realize that in the Old Testament – specifically 1 Kings and 2 Kings – that Kings are judged by their decision to build Asherah Poles or raze them to the ground. This is literally monumental news.

In conclusion I will say this. Let us talk politics for a moment. If the President of the United States is a true Christian he or she will start calling for the demolition of occult monuments like the Statue of Liberty. Paganism was pitched to us as patriotism in so many ways.