This is a sequel to my Batman is a Freemason post. It wasn’t my idea to turn Batman into a Freemason. Perhaps producer Christopher Nolan did this. More astutely Lucifer did this. I went so far as to draw comparisons of Batman to Nimrod. Now I will take it to another level. That is because Wonder Woman is also in this film. If you have seen Batman vs Superman you may ask yourself why is Wonder Woman even in this movie? The comic book people might tell you “this is about the Justice League”. That is a fine explanation by them but when you watch this movie you realize she is basically unnecessary to the plot. I am here to tell you that she is necessary to the occult plot. That is the real reason she is in this movie. I will show you why in this post.

And the beginning of his kingdom was Babel, and Erech, and Accad, and Calneh, in the land of Shinar. – Genesis 10:8-10 KJV

Interestingly enough concerning Genesis 10:10 the NIV Bible translation uses “Babylon” instead of “Babel”. Babel and Babylon are literally the same ancient city (at least biblically across versions). Recall that I just wrote about Babylon and Ishtar extensively in my Statue of Liberty is an Asherah Pole post. We have striking similarities to Ishtar when discussing Wonder Woman. In this movie Batman vs Superman Bruce Wayne is trying to find out who this Wonder Woman is. He discovers she is centuries of years old. That sounds like a useful effort by Bruce Wayne. Let us pick up where he left off. Let us “trace back” the true origins of Wonder Woman so you can see what is going on. All of these coincidences are being orchestrated by someone or something. I hope that I can make that obvious for you. A good place to start is the Wonder Woman Wikipedia page …

Wonder Woman was created by the American psychologist and writer William Moulton Marston, with his wife and co-creator Elizabeth Holloway Marston, and artist H. G. Peter. Their cohabitant, Olive Byrne, is credited as being Marston’s inspiration for the character’s physical appearance. Marston drew a great deal of inspiration from early feminists, and especially from birth control pioneer Margaret Sanger. The character first appeared in All Star Comics #8 in December 1941 and first cover-dated on Sensation Comics #1, January 1942. The Wonder Woman title has been published by DC Comics almost continuously except for a brief hiatus in 1986.

Wonder Woman’s origin story relates that she was sculpted from clay by her mother Queen Hippolyta and given life by Athena, along with superhuman powers as gifts by the Greek Gods. However, in recent years artists updated her profile: she has been depicted as the daughter of Zeus, and jointly raised by her mother Hippolyta and her aunts Antiope and Menalippe; artists George Perez gave her a muscular look and emphasized her Amazonian heritage; artist Jim Lee redesigned Diana’s costume to include pants; she inherits Ares’s divine abilities, becoming the personified “God of War”; and most recently, writer Greg Rucka, clarified her sexuality, giving her a backstory that includes relationships with women. – Wonder Woman Wikipedia

I will translate this for you in Christian terms. Wonder Woman is a pagan goddess whom just so happens to be created in the same fashion as the creation of first man Adam (Genesis 2:7). Her “real name” is Diana which is also a goddess in the Roman pantheon. She was formed by Queen Hippolyta according to her “bio”. Queen Hippolyta is not made up. She is in the real ancient Greek pantheon as a goddess. You may think because she is goddess of the “Amazons” that this has to do with South America (the Amazon river). Not so. The Amazons are what Greeks called a clan of women warriors. You may recognize Queen Hippolyta from the Hercules quests. Hercules has to bring back the magical belt of Hippolyte (same goddess as Hippolyta) in Labor 9 of his 12 labors. So there you have it straight from her own Wikipedia page. Wonder Woman is a blasphemous pagan magical lesbian feminist.

Did you know that Wonder Woman’s “powers” are condemned in the Bible? How can I say such a thing? Let us go to scripture …

Woe to the women who sew magic charms on all their wrists and make veils of various lengths for their heads in order to ensnare people. Will you ensnare the lives of my people but preserve your own? – Ezekiel 13:18 NIV

Feel free to read this page about Wonder Woman’s magic bracelets which are called the bracelets of submission here and here. I took note of some fascinating things from that page. Do you see that “wearing the bracelets as a symbol of submission to their patron goddess Aphrodite”? Did you notice that the bracelets are “magically made by Aphrodite”? We are clearly talking about Greek and Roman god and goddess pantheons when discussing Wonder Woman. Let me be so very clear. Roman and Greek goddesses are NOT Christian. In fact this is basically the definition of paganism. It doesn’t get much more pagan than this. Most Christians do not understand these things.

It gets worse. I want you to look very closely at a peculiar change they made to Wonder Woman’s costume in Batman vs Superman … 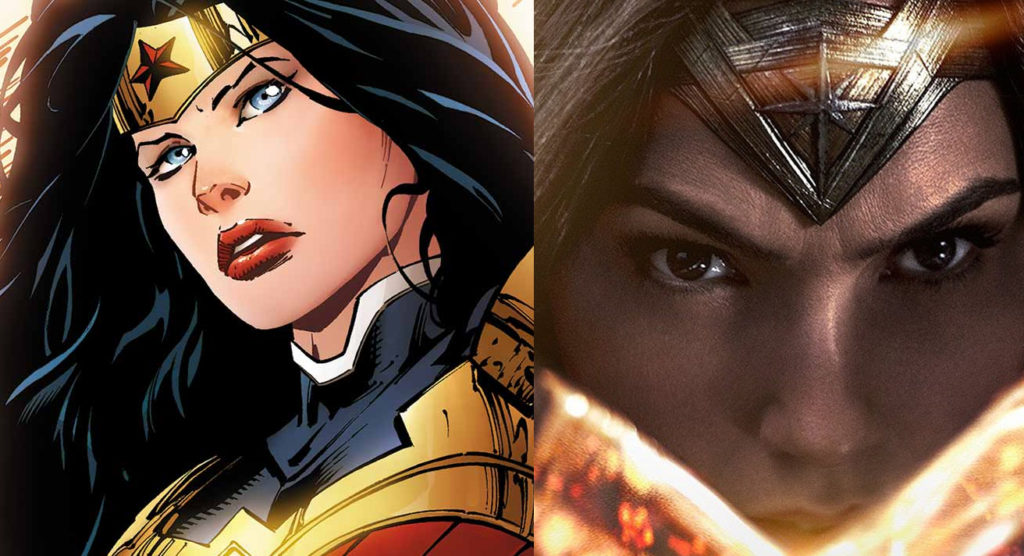 Can you tell me the difference between the traditional Wonder Woman comic book appearance and the “modernized” Wonder Woman? The star on her tiara has changed! Gone is the traditional red 5 pointed star which was likely pagan to begin with. The new replacement is none other than the occult star of Ishtar. Ishtar is just another name for Semiramis. This is so significant because I presented a lot of evidence in the Batman is a Freemason post that Hollywood / Christopher Nolan are transforming Batman into a Nimrod figure. Well, Nimrod’s wife was Ishtar and it just so happens the star of Ishtar is now found on Wonder Woman’s forehead. Do you see a pattern here? There is only one missing god that needs accounted for from the Babylonian Trinity. Tammuz! Can you guess which super hero from the Batman vs Superman movie represents Tammuz? Find out in my next post.