The Bill Murray classic movie Scrooged was available free on demand the other day. I didn’t have much interest in watching a Christmas movie – but Bill Murray makes me laugh sometimes. I let it play. It is quite intriguing to watch movies from the 1980s when you are woke in the 2010s. The movie Scrooged delivers plenty of hidden meaning to me. I’m going to share with you what I took away.

Bill Murray’s name in the film is Francis Xavier Cross which I found fascinating. Any name in the world is available for a fake movie name. The last name “cross” is chosen? The concept of the cross is not lost on the film’s writers … 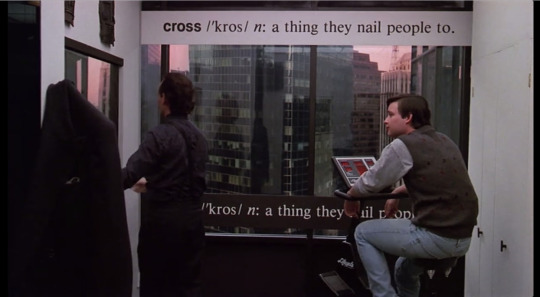 Deriding the cross is in bad taste. The writing is on the wall – literally. Those with discernment already feel quite uncomfortable with a “joke” in a movie like that. Please take the time to rationalize this next thought. How can a movie be making fun of the cross and promote Christmas at the same time? I thought “Christ was the reason for the season”! Woke people laugh at that saying. Let’s talk about crosses and Christmas a little bit.

And he that taketh not his cross, and followeth after me, is not worthy of me. – Matthew 10:38 KJV

Whosoever will come after me, let him deny himself, and take up his cross, and follow me. – Mark 8:34 KJV

If any man will come after me, let him deny himself, and take up his cross daily, and follow me. – Luke 9:23 KJV

Also it is found in 25 other places in scripture. That is a lot of mentions. Now if you don’t believe in the accuracy of scripture I don’t have much insight for you. But if you do believe in the accuracy of scripture then you know the cross is associated with Christ’s own words spoken. It can still be true that the ancient pagan god Tammuz was also represented by a cross. It can also still be true that religion over time has tried to compare the Christ to be the same as Tammuz. That doesn’t mean he is. What matters is what Jesus said. Take note of Hebrews 12:2 as well …

Looking unto Jesus the author and finisher of our faith; who for the joy that was set before him endured the cross, despising the shame, and is set down at the right hand of the throne of God. – Hebrews 12:2 KJV

Before Christ changed the meaning of the cross it was a symbol of extreme shame. Especially in the Roman culture. Not all cultures have the same meanings for the same symbols. That is an important detail for woke people. I’m also reminded of the rosy cross which means something totally different to the Rosicrucians than Christians. I’m also reminded of the ankh in Egyptian culture which is not Christian. Also the upside down cross which is a common Satanic symbol in our times. To summarize – not all crosses are the same. The cross itself is in scripture associated with Christ 28 times in the KJV.

Do you want to know something that is NOT scriptural? The December 25th Christmas holiday. You can find thousands of good online articles – even full books – explaining why Christmas is not Christian. I don’t want to re-hash all that in this article. To highlight the big items for anyone new to this concept start with the Christmas tree. In one sentence the Christmas tree is not Christian. Many believe Jeremiah 10 forbids Christmas trees – but even if you don’t think Jeremiah 10 is about Christmas trees just google “winter solstice evergreen” please. If you want to trace the Christmas tree back to Nimrod go for it. I believe there is truth there. By the way Nimrod was the father of Tammuz and one of the most wicked men found in the Old Testament Book of Genesis. He is quite possibly your Christmas tree inspiration. Google “Santa Claus in other countries” for a fun read. Of course there is the ancient Roman feast of the Saturnalia which was a giant drunken orgy party in Rome. That feast is quite possibly a feast much older than Rome mind you. Finally the winter equinox (equinox holidays are sun worship and very much forbidden in Ezekiel 8:16). Surely then you are not surprised to see the sun decoration on the wall in the movie Scrooged. It is not there by accident. Put in your own due diligence by all means.

Consider the following for the accuracy of the birthday of Christ. Shepherds don’t sleep outside in the ancient days around December 25th in that region. There was a census happening. Census events required traveling back to your native country for accurate head counts. Travel was hard back then. A census wouldn’t be scheduled in that time in that region. Also I think it is very interesting that the Roman Catholic Church celebrates the Feast of the Immaculate Conception on December 8th. Either Jesus was in Mary’s womb for just 17 days or the December 25th Christmas is off by like 4 months. Pick one. I know which one I believe. Furthermore I’m not even convinced birthdays should be celebrated – if you are trying to live by scripture. Do your own research on that by googling “celebrating birthdays in the bible”. It is not hard to find scholars who will tell you the wise men brought their gifts to Jesus because he is a King – not because of a birthday tradition. I know in the Satanic Bible your own birthday is a top holiday. I try not to do what they do.

So now we have covered crosses and Christmas in some detail. I have established the cross is found in the Bible and the December 25th Christmas is not. Please do your own due diligence on it. But now we circle back to this movie Scrooged. Have you ever seen this movie? It is from the 1980s. In this film Bill Murray is a high ranking television executive. He wants to spice things up. He has an idea for the Scrooge promo that will run on the airwaves to promote his TV station’s live Scrooge broadcast …

I found this little clip from the Scrooged movie so incredibly profound. Follow my observations. Woke people know the December 25th Christmas is false. Woke people have different theories on when the actual birth of Christ occurred – but most agree it happened in the summer or fall. If you consider December 8th to be accurate for the conception date and you believe Jesus to be in the womb around 9 months then the real birthday would be around – wait for it – the second week of September in the West! We all know what happened on September 11th in the West. What event is shown in the clip above? An airplane exploding with the caption “international terrorism”!

The Bill Murray Scrooged movie was made in 1988. This was 13 years before the 911 airplane hijacking on September 11th 2001. The clip ends with an atom bomb exploding. That detail was not lost on me.

I wonder out loud to you if it was Satan’s plan all along to orchestrate the 911 event (no matter who caused it) on Christ’s real birthday. Why? So that it wouldn’t be reasonable to move Christmas from the false December 25th in the West to the real date. As people find out on the internet when the real birth date of Jesus occurred there would be a natural uprising to celebrate on the actual day. Orchestrating a monumental disaster near or on the actual date makes that transition much harder. I also wonder if this Scrooged movie is predicting an atomic bomb explosion event in the West. I just wanted to share those thoughts with you.