A few years ago when Kanye West’s short film Runaway was released there was quite a buzz going on about Kanye West and devil worship.  This of course put Kanye on the defensive (anyone would be).  Here are some of his tweets concerning the accusations at the time.  These were referenced from an MTV article in 2010 …

2) “Is illuminati and devil worshipping like the same thing … do they have a social network that celebs can sign up for?”

Kanye still has some of these questions to this day.  Here is an interview from October 2013 concerning the illuminati with Wild 94.9 …

That interview with 94.9 is absolutely fascinating.  Kanye tells the 94.9 radio station that he wants to be like Christ.  He tries to explain why he uses a lot of Jesus imagery in his music videos and concerts but I’m not sure he knows truly why.  Once again there is the unanswered question “does anyone know what the illuminati is supposed to be?”.

I accept the challenge.  I am going to attempt to answer Kanye’s questions to the best of my ability.  We start right now …

The Illuminati – What is it Exactly?

If you get absolutely nothing else out of this blog you can at least get an answer to “what is the Illuminati exactly”.  I can do that much because I just answered that exact question in a post about a man named Sean Carter.  The world knows him better as Jay-Z.  So many “experts” across the internet butcher the answer to that simple question that it becomes a concept incredibly clouded and confusing to understand.  It doesn’t have to be.  The Jay-Z ROC sign actually provides a solid introduction to study this question.  You can find that answer in my previous post is Jay-Z Illuminati (towards the bottom of the post).  So there you go.  I have now answered a question for Kanye West that he has had for years.

Why do people think pop stars have a membership to the Illuminati?

Another perfectly valid question.  The answer to this question is a two-part answer.  The first answer is symbolism.  Celebrities (specifically music artists) create music and albums and these works can contain symbolism.  Symbolism can be associated with some very dark concepts if you intend them to be.  That is why people think pop stars have a membership to the Illuminati (even if their concept of “what the Illuminati is” is misguided but I clear that up in my Jay-Z post) .  The second answer is influence.  The KanyeWestVevo Youtube account has hundreds of millions of views.  That is a tremendous amount of influence.  These are the reasons why.  These answer question #2 simply.

Is Illuminati and devil worshiping the same thing?

As I explain (with illustrations) in the Jay-Z post the Illuminati is a level within European Masonry above the Palladium and below The Nine Unknown Men.  That means it is a fancy title in a secret society.  It really can be that simple for a starting point.  Now devil worshiping is something members of the Illuminati can (and likely do) practice.  They are kind of mutually exclusive but on a Venn Diagram they could certainly and likely overlap.  I hope that sufficiently answers question #2.  Let’s examine some things devil worshipers do to get a better grasp of why Kanye West draws accusations of devil worshiping.  This is an appropriate time to talk about blasphemy …

I feel the reason Kanye draws so much heat is mostly because of blasphemy accusations.  Blasphemy is a complex topic.  Sometimes you know it when you see it.  Sometimes the lightbulb doesn’t go off when it should.  Lets start with some biblical references …

Instances of Blasphemy in the King James Bible

As we can see Christ is accused of blasphemy in Matthew 26:25, in Mark 14:64, in Luke 5:21 and in Mark 2:7.  Was he actually guilty of it?  Not if Christ is indeed the Son of God.  Anything else would be fraudulent claims and the blashemy charge would stick.  Therefore fraudulent representation of YHWH is a form of blasphemy.

Mark:20 And he said, That which cometh out of the man, that defileth the man.

Mark:21 For from within, out of the heart of men, proceed evil thoughts, adulteries, fornications, murders,

Mark:23 All these evil things come from within, and defile the man.

Christ himself condemns blasphemy in the Bible.  It is right there for all to see in Mark:22.  Notice the mentioning of “the evil eye”.  That is certainly noteworthy.  I have found that anything Christ or YHWH explicitly says not to do is likely to be included in Luciferian, Thelema, or Satanic doctrine.  I have come to understand that much (Molech, vampirism, astrology, sorcery and worshiping the goat / ram / bull of the Day of Atonement are all concrete examples of this).  Add blasphemy to the list.

There are Religions That Encourage Blasphemy

Are there any other styles of blasphemy besides claiming to be a diety that you fraudulently are not?  Yes there are.  Aleister Crowley (the Founder of the Thelema religion) knows a thing or two about it.  He invented a ritual called The Cross of the Frog.  The Cross of the Frog contains instructions on how to conduct blasphemy via mockery.  Thus mockery of YHWH is another form of blasphemy.  I cannot make it any clearer that within Thelema doctrine there is an endorsement for performing blasphemy.  I will now proceed with some imagery that Kanye West has put forth for the public to consume … 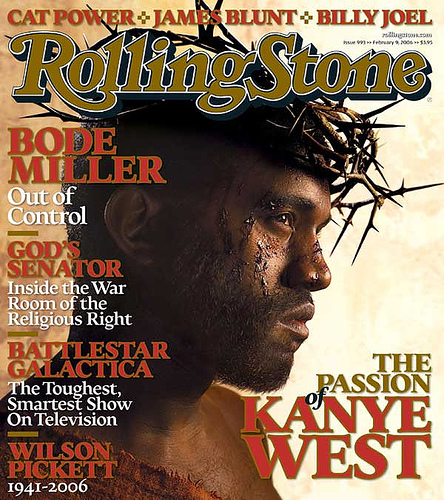 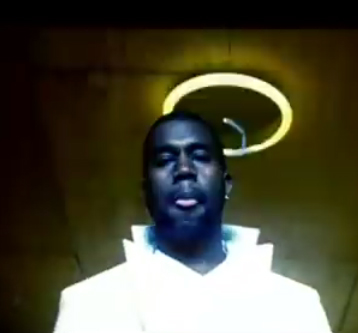 Jesus Walks music video with a ceiling light doubling as a halo. 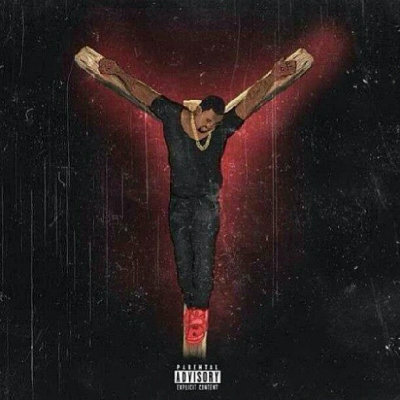 Yeezus alternate album cover in 2013.  To repeat – the title of the album is “Yeezus”.

One more thing about blasphemy before we wrap up Part 1.  We need to mention the late Roger Morneau.  Roger was a man invited to be a devil worshiper in the 1940s.  He is old school.  He was invited to join an elite Luciferian secret society in Montreal Canada when he was in his twenties.  He turned his back on the invite and became a Seventh Day Adventist instead.  This is not as easy as just calling up the Luciferian high priest and telling him ‘thanks for the offer but you want to peace out from devil worshiping’.  It doesn’t work like that.  They put a bounty on your head if you say no.

Now a very interesting thing about that.  Morneau survived walking away from the offer.  I encourage you to read A Trip Into The Supernatural by Robert Morneau to find out how he pulled that off.  Robert is someone who truly knows what devil worshiping really is.  I am someone who simply relays the message.  With that said, these are the kind of people I learn the most from.  Luciferian defectors educate Christians on what the real scoop is in this world.  This is what Robert has to say about musicians who sing songs that are not Christian inspired but who wear Christian jewelry.  A word that comes to mind for such a pop star is ‘hypocrite’ but that is for you to decide  … 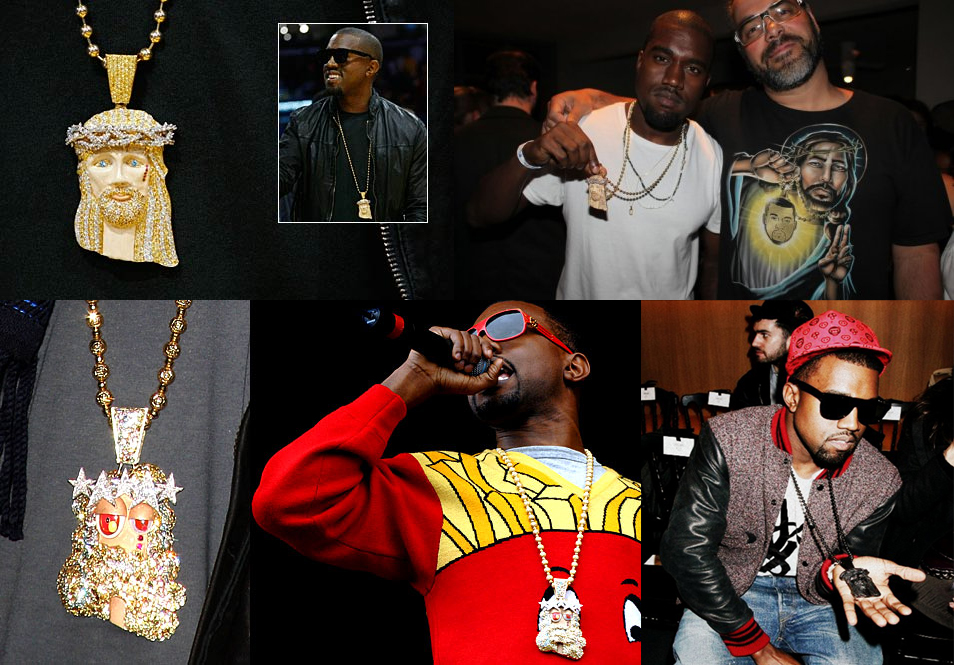 So now you probably have to make a choice.  We hear Roger Morneau say “rock stars wear Christian jewelry as a form of blasphemy” (paraphrasing) in the Youtube interview.  He is a Luciferian defector himself who has written a handful of books on the topic.  I would say he would know a thing or two about devil worship.  We then compare that against Kanye West saying he wants to be like Christ but he’s not really sure how devil worshiping works but he knows he rocks fresh Jesus medallions.  Someone isn’t telling the truth or someone is lying or someone is deceived or something is wrong.

This concludes Part 1 which was a study in blasphemy.  Part 2 is going to look at some of Kanye’s music videos to further explore why people accuse Kanye West of devil worship.  In Part 2 we will go deeper than Part 1 with heavier occult references that no one else is talking about (more my style) but I felt Part 1 was absolutely necessary before we move on.

P.S.  Kanye when you read this blog post I have a simple request.  I want you to read A Trip Into The Supernatural by Robert Morneau.  It is only 141 pages.  Thank you.