This is the follow up post to Is America Mystery Babylon Part 1. In that post I brought up some things that I don’t think are obvious to most Americans or most Christians for that matter. I hope this post can be just as intriguing. I intend to raise the bar. To recap I am addressing this specific scripture from Revelation 17 which has caused much debate for thousands of years …

Is America Mystery Babylon The Great? Let us continue the conversation …

I have been writing a series called Dark Disney for a reason. Last time I checked Disneyworld and Disneyland are located in the United States. Ladies and gentlemen Disney is built on a coven of witches. Just to name a few. Yzma, Mother Gothel, Madam Mim, Queen Narissa, The Enchantress, Ursula, Maleficent, Morgana, The Evil Queen, Witch Hazel, Jada the White Witch, Hecate, Lady Bane, Glacia the Ice Witch, Zinessa, Zara, Valeena, Lady Rancora are all witches. Don’t forget about Elsa the Snow Queen, Rapunzel and Aurora. All of these are witches. All roads lead back to Babylon. Semiramis Queen of Babylon was the first witch (at least one of the first). Ancient Babylon was a land of witchcraft. Do you see any correlation there? Hello American Parents! I am talking to you. Your children are being taught to love witchcraft by Disney at a very young age. Likely you were to. It is a brutal sobering truth.

Hollywood is rapidly transitioning Super Heroes into ancient Babylonian and Pagan gods with their costumes, symbols, and storylines. Wonder Woman is being converted into Ishtar (Ishtar is just a “stage name” for Semiramis like Lady Gaga or Sasha Fierce), Batman into Nimrod, and Superman into Tammuz. I have written about this extensively in my posts Wonder Woman is Ishtar, Batman is a Freemason and Superman is Tammuz. I am one of the few whom have discovered this. Now you know.

Can you tell me where did today’s zodiac come from? It came from Babylon of course. Don’t believe me? Google “where did the zodiac signs come from”. Understand that Mesopotamia is the same thing as Ancient Babylon. From my research I have found the theory that Queen Semiramis of Babylon converted the original zodiac into a sky of lies …

Semiramis was the instigator in forming the false religion aimed at supporting their rule, and of course her suggestion fell upon open ears. The religion she invented was based primarily upon a corruption of the primeval astronomy formulated by Noah’s righteous ancestors before the flood. In the original this system depicted by means of constellations the story of Satan’s rebellion and the war in the heavens, his subversion of mankind, the fall of Adam and Eve, the promise of One to come who would suffer and die to relieve man from the curse of sin then be installed as Lord of Creation, and the final re-subjugation of the cosmos to God through Him. – http://ldolphin.org/semir.html

I cannot confirm or deny that. However the theory exists for sure. Now swing by aol.com and yahoo.com. Let me know if you find horoscopes on those web pages. Two of America’s biggest websites promote horoscopes on their home page. For goodness sakes it is called “America Online”! 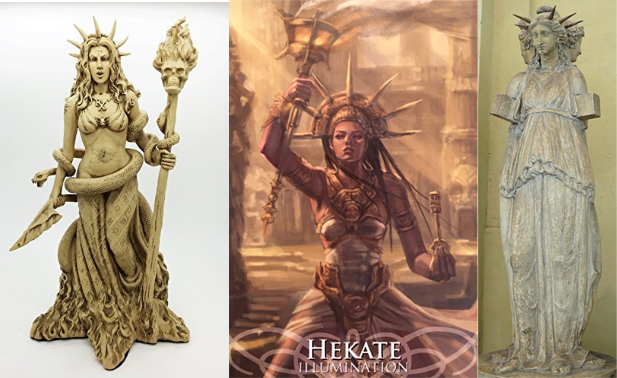 Use your eyes. Does Hecate look like Lady Liberty to you? Face the truth. The symbol of the United States is a 305 foot witch queen. By all means fact check me. You will find it a challenge to say “she is only Ishtar” or “she is only Libertas” or “she is only Hekate”. These particular ancient goddesses have intertwined together throughout history. In fact Hekate is called a triple goddess. It is common to hear her described as a triple deity called Phoebe or the Moon in heaven, Diana on the earth, and Hecate or Proserpine in hell. Do some googling. You will find that they have ties to the Statue of Liberty which is the most giant of American symbols. Not good news for true American Christians.

There are many other things in New York City that are obvious celebrations of the occult (the Oculus train station, the golden calf called the “wall street bull”, the statue of Atlas, and of course there are no shortage of 9/11 theories). Focusing on just the Statue of Liberty is plenty to digest for this post.

Babylon is the origin of Christmas and Easter hands down. Specifically Christmas to Nimrod and Easter to Ishtar. Research these topics on Google and you will find thousands of results. Not everything you find is necessarily the truth. Where there is smoke there is fire. I like this explanation in particular …

Beyond Christmas and Easter is there any particular holiday you would associate with witches? Perhaps a holiday where Americans literally dress up like witches? I am speaking of Halloween of course. It is also called Samhain. I have already mentioned many times in my posts that Semiramis was one of the first witches.

America could be celebrating the holidays that Jesus himself honored – but we don’t. Ask yourself why.

America’s capital city. The District of Columbia. Do you know the origin of Columbia? I didn’t. Then I came across a great video explaining it. You can find it here …

This guy Thom knows. Thom even knows that the Washington Monument is a giant penis monument lol. Let us talk about giant penis monuments for a moment. They are called obelisks. These things have been around for a long long time. According to historian Diodorus the witch queen Semiramis erected a giant obelisk. In fact it was one of the 7 wonders of the ancient world …

“Semiramis quarried out a stone from the mountains of Armenia which was one hundred and thirty feet long and twenty-five feet wide and thick; and this she hauled by means of many multitudes of yokes of mules and oxen to the river and there loaded it on a raft, on which she brought it down the stream to Babylonia; she then set it up beside the most famous street, an astonishing sight to all who passed by. And this stone is called by some an obelisk from its shape, and they number it among the seven wonders of the world.” – Diodorus Siculus, Bibliotheca historica, Book 2, Chapter II, Verses 4-5

I think this is a good place to stop. I have provided material that should concern any American that considers themselves a Christian. Read up on these things. Welcome to Witch Country.