I need to share something with you that disturbs me as an American. The topic is how the USA wants to be Babylon. Ancient Babylon is supposedly 52 miles south of current day Baghdad, Iraq. That is what the media tells me. Fair enough. I suppose I can believe them on this one. My question for you is do you know the ways of ancient Babylon? Are you familiar with the warnings in the bible concerning it? Here is some scripture to pay attention to …

For thousands of years it has been debated and discussed the identity of this Mystery Babylon mentioned in Revelation 17. Who is this Mother of Harlots and Abominations of the Earth? In what land is she found and how will we know her? Now there are several things that the God of Abraham, the Prophets, and the Messiah define as abominations in the bible. Some of them are easy to spot. Murdering, stealing, lying, fraud, rape, etc. Your average Christian can spot these easily. The abominations that are a mystery are a little harder to identify. These would be things like witchcraft, paganism, sun worship, divination, the nephilim, polytheism, idols, etc. Some abominations are a little harder to recognize. Now here comes the hard truth. These abominations are in your back yard if you are an American Citizen. You may not want to hear this. It is depressing to real Christians. I’m just teaching you what your schools will not.

Some of these topics I’m about to point out are “mother of harlots” things. Some of these are “abominations of the earth”. All of them are far from Christian. This isn’t me making stuff up. This is me reading my Bible and telling you “my fellow Americans these particular things are bad news” …

Let’s take a minute to chat about magic. Magic is forbidden by the God of Abraham in the Old Testament. Why is magic forbidden? What’s the big deal? Because magic is a prayer to any fallen angel / demon that will pick up your request. Very few know what magic actually is. Yet you have three major basketball teams named directly after magic and wizards. Think long and hard why are two teams from our national capital named the Wizards and the Mystics? Just waking you up from your slumber.

Moving on. Naming your team the Titans (NFL) is a problem for Christians. They did this in the “bible belt” of Nashville Tennessee and no one says boo about it. See my post called pagan things if you don’t know what paganism is. Anytime you are dealing with ancient pagan gods like the titans you are dealing with abominations.

An interesting theory is that the ancient pagan gods are the same thing as the nephilim. The nephilim are the wicked offspring of fallen angels and humans written about throughout the Old Testament. Maybe the ancient pagan gods are fallen angels themselves. It is all so very fascinating to me. A key note. The nephilim were giants. Which brings us to the sports team the Giants (MLB and NFL). We are now naming sports teams shout outs to the nephilim. When all else fails you can just name your team the Devils (NHL). I bet you never contemplated the meaning of sports teams like this. Well you should! I am sure there are plenty more examples.

Did you know the city of Atlanta is named after Atalanta. Atalanta is a greek goddess known as a virgin hunter who loved racing on foot. One of the largest cities in the south is named after a pagan goddess. Not Christian.

Do you know what Olympia is in history?

The Temple of Zeus at Olympia was an ancient Greek temple in Olympia, Greece, dedicated to the god Zeus. The temple, built in the second quarter of the fifth century BCE, was the very model of the fully developed classical Greek temple of the Doric order. – Temple of Zeus Olympia Wikipedia Page

Olympia is an ancient greek pagan city known for the shrines of greek pantheon gods (especially Zeus). A “pantheon” is a family of gods by the way. Not Christian.

The phoenix is the official bird of Lucifer. The phoenix rising is an occult reference to Lucifer rising from his fall. I talk about this a lot in my post Batman is a Freemason and X-Men Apocalypse and the New Age. Read those if you want to. Or don’t. The Luciferians themselves love the phoenix. It can be that simple. Fact check me. Now consider we have a major city named Phoenix in the United States. Chalk up another vote for “abominations of the earth”.

8) The Babylon Gate at Hollywood

The Babylon Gate in Hollywood is a great vote for USA as “mystery babylon”. Here is a picture of it … 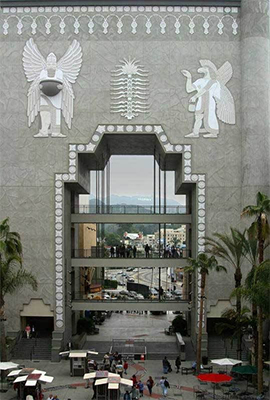 And this is a great article which explains this gate and much more about Hollywood. A great read … http://secretsun.blogspot.com/2008/02/drama-ritual-and-ausur-goes-to.html

Hey I have a question. Why don’t they teach you this stuff in public school or in college?

We have some really weird statues in the United States. When you come to understand “weird” very often translates into occult or pagan you are becoming quite the intelligent Christian. Let me give you a few examples of strange statues (or idols) in this land … 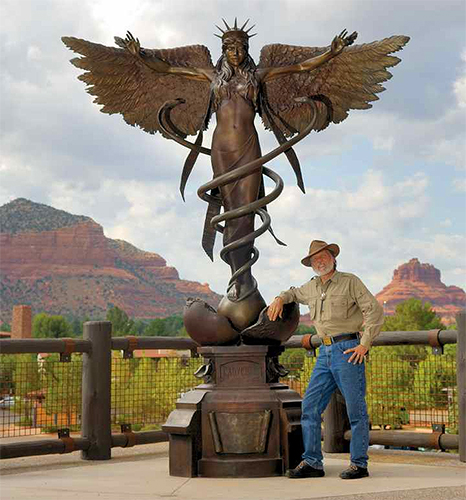 b) The Awakening in National Harbor, Maryland. Who exactly is being awakened? Not Christ. More like Nimrod is my educated guess. Nimrod was the Founder of the city of Babylon. He was also the son of Semiramis. Also the wife of Nimrod. Yes that is correct. His mother is his wife. Welcome to the ways of Babylon. This is the culture America aspires to be like. 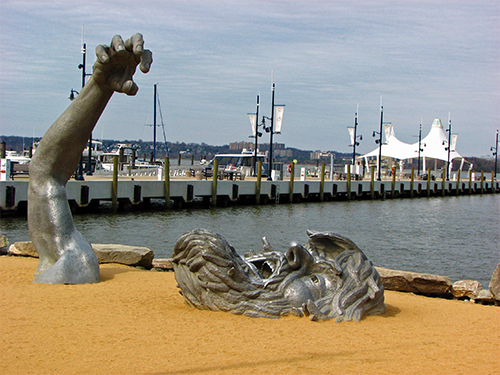 c) Neptune at Virginia Beach. Neptune is from the Roman pantheon of gods. Same as the greek god Poseidon. It is a giant statue of a pagan god on a USA beach. Let that sink in.

d) Blucifer and Anubis at the Denver Airport. Denver Airport is a devil worshiping hotspot. This is well documented on the internet. Google it or search on Youtube. In particular to this article is a statue of a horse with glowing red eyes nicknamed “blucifer”. Blucifer actually killed the sculptor when a piece of the statue broke off and struck down artist Luis Jimenez during its creation. If blucifer isn’t enough there is a 26 foot tall statue of ancient Egyptian god Anubis standing tall at Denver Airport. Also check out the murals around the airport. These abominations of the earth are found in the United States of America. NOT Christian.

e) The Georgia Guidestones. Sometimes called the American Stonehenge (stonehenge is a pagan worshiping site so this is no surprise). The Georgia Guidestones are some kind of anti ten commandments. You can google them and educate yourself on what they say. Some of them sound nice but most of them have wicked double meanings. Basically the first commandment is kill 90% of the world population. That gives you an idea of what kind of “monument” you are dealing with. This is in America! 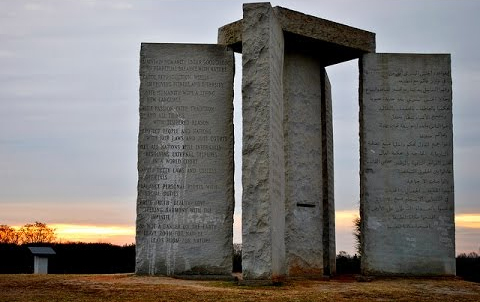 I haven’t even cracked the top 5 yet and you should feel like throwing up in your mouth. We need to make some changes my fellow Americans. The abominations found within our borders are far from Christian. Whom amongst you would object to re-naming some cities? Whom is up for peacefully and gracefully deconstructing some abomination statues? I already know my fellow Americans would shout me down. Their objection would only be biblical. Why? Because Babylon and her ways are a total mystery to them. In one sentence …

Babylon is a mystery to her own people.

That is the answer to the riddle of Revelation 17:5 if you ask me. Its not about me saying “this is witchcraft” and “that is paganism”. If you don’t know what real witchcraft is you will fall for it. If you don’t know what I’m talking about when I say paganism you will go along with it. Push your education further my friends. American schools are not going to teach you this. Start googling. More to come.