Ladies and gentlemen paganism is promoted to you on a daily basis. Literally on a daily basis. In this post I will show you just how much paganism is a part of your every day life. Before we get to that though we must talk about the concept of paganism itself. People throw that word around like you should just know what it means. Like they teach it in public schools or something. They sure do teach it – but not how you think.

Let me summarize for you what paganism is. I will extend you a courtesy that likely no one has ever done for you. We start with earth, wind, water, and fire. The elements are extremely significant to pagans. It is a common thing for pagans to use these elements and other items found in nature in magic rituals. Magic is a pagan thing. Not only are there magic rituals but there are entire pantheons built around the elements (and other natural events). A pantheon is a group of gods. Popular pagan pantheons include the Norse gods, the Greek gods, the Celtic gods, and the Roman gods. In the Wiccan pantheon it is common to find the horned god and the goddess ruling. Pagan holidays honor (not surprisingly) pagan gods which often fall on equinoxes and solstices (the sun). Astrology, the zodiac, the horoscopes, and sun worship are all pagan. They have their own symbols as well. These are basic concepts of what is going on.

So there you have it. Someone has finally explained to you the basics of paganism. As a Christian what are the problems with paganism? Focus on the magic. If you are practicing magic I ask you which god(s) perform the supernatural effects that bring the magic about? The answer is whatever god will hear you and its not the God of Abraham or Jesus or the Holy Spirit. Therein lies the incredible danger to the Christian. Personally I think pagan ways do have power. But where that power comes from gets disgusting. I believe that pagan gods are ancient fallen angels (Lucifer and his rebel angels) and the children of ancient fallen angels (the Nephalim found in Genesis). Their magic and rituals and astrology are real if you ask me. But its not the highest power. The ways of the fallen angels are the broad and crooked way to the hell fire.

But perhaps the pagan gods are only popular in places like Greece and Rome (if any place at all!). What about the United States? Let me give a small personal testimony. When I was a young student in the American public school system I was recruited to pursue the Greek pantheon. There was a special program for the “gifted” children around the age of 12. It was required to pass kind of an IQ test to get in. When I took the test I came up slightly short. My feelings were crushed. Now there was a burning question. Exactly what were they studying in that special “genius” class? Well I came to find out what my gifted classmates were studying. They showed me even though they really weren’t supposed to. My classmates were learning the Greek pantheon in the sixth grade! And there it was. Can you believe it! I did not realize what was happening until a much older age. What was that special class? Well, what would you call the teaching of extremely intelligent children pagan gods and pagan ways in secrecy while everyone else is learning gym class and social studies? Ladies and gentlemen that is called a mystery school. There was a mystery school in my public school in the USA. I saw it firsthand.

I find it fascinating that children are taught to be disappointed if they cannot join in the mystery school. The tone is set at an early age. We are taught sooo many lies! I pray that an intelligent child reads this when googling something about paganism. Or perhaps a mother or father reads this and discovers what the “gifted” program is all about. Now you understand what is happening in some gifted programs. Investigate for yourselves in a school near you.

Enough of elementary school. I have shown paganism is found in some public schools by a personal testimony. But what of work? Well, do you use the American days of the week at your workplace? Do you use a calendar? Do you know what the days of the week mean? Would it shock you as an American that you honor the Norse pagan gods multiple times every week?

What was hidden is now brought to the light. Here it is …

The name comes from the Latin “dies solis” meaning “sun’s day”. Also the name of a pagan Roman holiday.

The name comes from the Anglo-Saxon “monandaeg” meaning “the moon’s day”. This second day was sacred to the goddess of the moon.

This day was named after the Norse god Tyr.

The day named to honor the Norse god Wodan. Same as Odin.

The day in honor of the Norse goddess Frigg. Same a Freya.

This day was called dies Saturni, “Saturn’s Day”, by the ancient Romans in honor of Saturn.

What does this mean? It means every single day of the week in the United States is rooted in paganism. Every single day. Is this shocking to you? Did you already know this? If so I congratulate you. It was news to me too not too long ago. This is why it is amazing and I am sharing it in a post.

Now maybe you think “well these days of the week were established a long time ago and no one cares about paganism today”. Ohhh really? Well I went to the local retail store to find out. I picked up a copy of the movie Thor (2011) with Chris Hemsworth and Anthony Hopkins. After all Thursday is Thor’s Day. I wanted to know what this movie Thor was all about – or maybe more succinctly what is being promoted in the Thor movies. To no one’s surprise I found a few important things that need be shared.

The first thing you will notice if you pay attention closely is the symbol on Thor’s Hammer in the movie (the hammer is called Mjölnir). There is a brazen symbol on the hammer in this movie and it is called the triquetra. The triquetra is one of the most popular pagan symbols in existence. It symbolizes mind, body and soul. It also symbolizes earth, water and sky (remember the worship of the elements?). So right away in the movie we see a pagan symbol and it is branded right on Thor’s hammer. 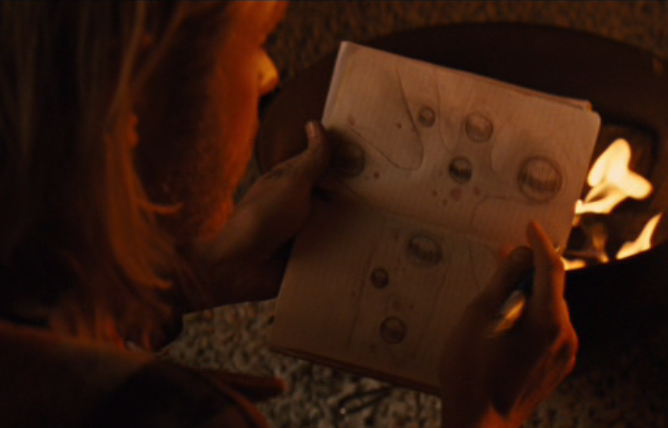 Finally if you watch the Thor movie closely you will see them open a book that says “Thursday is Thor’s Day”. This wasn’t an accident. This movie is all about promoting pagan gods. Now you know. 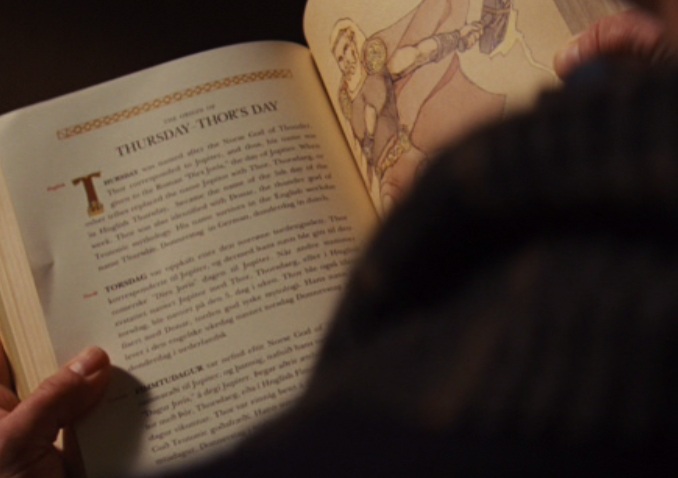