Lets talk about Pac! Did you know 2Pac has a giant cross tattooed on his back and a tattoo of Jesus on his arm? Yep. Did you know he wrote songs like Only God Can Judge Me, Ghetto Gospel, I Wonder If Heaven Got A Ghetto, Black Jesuz, Blasphemy, Thugz Mansion, and Lord Knows? I know. Tupac was well aware of Christian topics. There is no shortage of Christian inspired lyrics in his songs. I am well aware. Did you know he wanted to go to war with the Illuminati so he read The Art of War by Sun Tzu? I used all this ammo for years to defend him as basically a “good Christian celebrity”. Have I changed my tune?

Let’s start with a few 2Pac song titles. Let us briefly talk about the song “Only God Can Judge Me”. Tupac wrote this with the cops and the courts in mind concerning “their judgement against him”. I’m here to tell you that specific phrase “only god can judge me” is not Christian or righteous for that matter …

Thou hypocrite, first cast out the beam out of thine own eye; and then shalt thou see clearly to cast out the mote out of thy brother’s eye. – Matthew 7:5 (KJV)

Jesus explains clearly that hypocrites shouldn’t judge. It infers righteous people can. What is a hypocrite though? Is a hypocrite a musical artist who writes songs titled “I Wonder If Heaven Got A Ghetto” and “Black Jesuz” while at the same time writing 7 songs with the F word in them and more than a dozen songs glorifying thugs? Numerous songs glorifying murder? Multiple songs praising Hell? Does that fall under your definition of a hypocrite? As I type this I go to e-sword to look up “Ye shall know them by their fruits”. I just quoted Matthew 7 a few sentences ago. All I had to do was keep reading Matthew 7 …

I’m not writing this because I hate Tupac. I’m writing this so you sober up as a Christian. I used to think Tupac was a shining example of holiness because he had a giant cross tattooed on his back. First of all tattoos are an abomination in the Old Testament. So if you are trying to honor Jesus or his Father with tattoos you may as well make lemonade for your dad and just pee in it. That is the equivalence of what you are doing. Straight from Leviticus …

Ye shall not make any cuttings in your flesh for the dead, nor print any marks upon you: I [am] the LORD. – Leviticus 19:28 (KJV)

Now back to Tupac’s ink. Tupac indeed has a giant tattoo of a cross on his back. Here is what you likely don’t know. Not all crosses are the same. His is a rosy cross which is a particular style of cross used by the occult Rosicrucians. Google images of the “rosy cross” to familiarize yourself with the style. It looks like this … 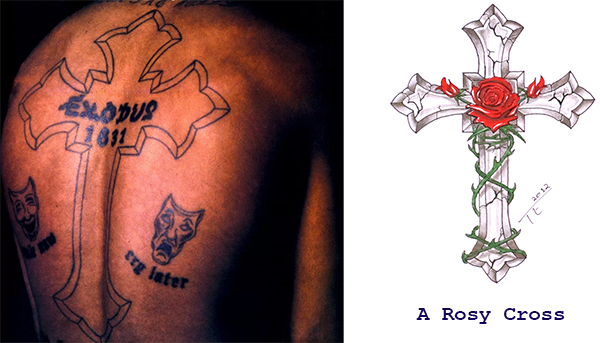 You will see that is the style of his tattoo. Not to mention “Exodus 1831” is inscribed boldly on his rosy cross tattoo. For years I thought that was a bible verse until I actually opened up that old dusty bible lol. There is no Exodus 18:31 bible verse. Instead that is a reference to a murderer named Nat Turner who killed 55 white people in a slave revolt in 1831. What you thought was a Christian cross is actually more pagan than anything else with a crass tribute to a mass murderer. Easy for me to say. I wasn’t a slave in 1831. Nonetheless hard to argue that Tupac’s giant tattoo isn’t honoring a mass murderer. Now here is more hypocrisy that just can’t be ignored. “Exodus” as written across the back of Tupac is where we find the Ten Commandments in the Old Testament …

There is more. He has a Skull and Bones tattoo on his right arm that says “Heartless” in all caps. Are you familiar with the Order of the Skull and Bones? Do you think Tupac knew that basically one of the top recognizable symbols of the Illuminati is the Skull and Bones? I highly doubt he knew that. Thus another real danger for every person who gets a tattoo. Because most of you have no clue about paganism or the occult you will often get more than you bargained for marked onto your body without even knowing it. Exhibit A. A man who made the album “Killuminati” has a tattoo of the Skull and Bones on his right arm. Do you need more? He went by the alias Makaveli. You do realize that is a tribute to Niccolo Macchiavelli who authored The Prince which is a book essentially laying out instructions for the Illuminati to control the people? Hypocrisies on top of hypocrisies. By all means fact check me.

But now ye also put off all these; anger, wrath, malice, blasphemy, filthy communication out of your mouth. – Colossians 3:8 (KJV)

A naughty person, a wicked man, walketh with a froward mouth. – Proverbs 6:12 (KJV)

All the words of my mouth are in righteousness; there is nothing froward or perverse in them. – Proverbs 8:8 (KJV)

The fear of the Lord is to hate evil: pride, and arrogancy, and the evil way, and the froward mouth, do I hate. – Proverbs 8:13 (KJV)

His mouth is full of cursing and deceit and fraud: under his tongue is mischief and vanity. – Psalms 10:7 (KJV)

For the sin of their mouth and the words of their lips let them even be taken in their pride: and for cursing and lying which they speak. – Psalms 59:12 (KJV)

Froward means perverted for those who didn’t know that. Now pay close attention to those last two verses. They say when you curse with your mouth you bring curses upon yourself. That is biblically accurate. If you get nothing else out of this entire post understand that. Cursing is the language of choice for the demons and fallen angels. Understand that. Whenever you hear someone cursing you are not hearing the Holy Ghost. I am quite confident in saying that. Consider what I have said whenever you listen to your own iPod. Or watch any movie. Or browse any YouTube videos. But most importantly consider what I have said when you speak your own words. Tupac cursed constantly. Righteous people do not swear. People in good with the Holy Ghost do not swear. Why? Because the righteous do not bring curses upon themselves. That is why.

Most of you are probably furious with me for shredding Tupac’s Christianity by this point. I ain’t mad at yah. It just means you don’t have discernment yet. Believe me I didn’t either for the majority of my life. You can get there though. Now this is where this article takes an intriguing turn for the better. I have a theory about 2Pac and his legacy. I think that if we are honest with ourselves Tupac wasn’t bearing good fruit. However I feel there was great potential to do so as proof by his Killuminati agenda which is not coincidentally linked to his end. When I reminisce on this man my gut feeling tells me that 2Pac might have “figured it out” had he lived long enough. He would have come to the understanding what the Illuminati really was. He would have learned that the only way to actually battle the Illuminati is not to put yourself hanging on the cross on your album cover but rather in two little words become righteous. If you need a visual aid … 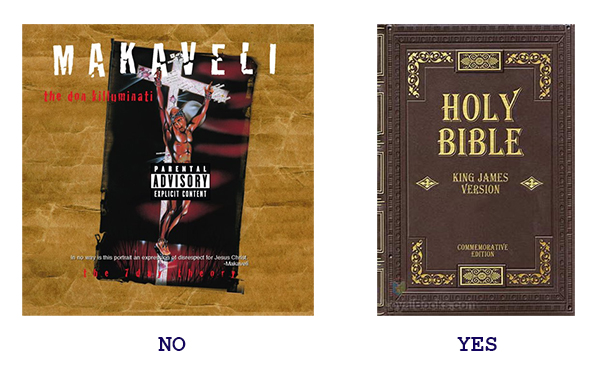 My interpretation of John 3:1-3 is you need to get right like you never have before aka righteousness. Focus on righteousness instead of rap lyrics. You do this by challenging your own sins and asking for forgiveness a lot and forgiving in turn a lot. Ride on your enemies? No.
Pray for your enemies? Yes. Start small to get some momentum and off you go.

It starts with your own commitment to seek righteousness. The best place to start is the New Testament in the KJV Bible. Become very familiar with that. It doesn’t even start with church. I would say 98% of churches aren’t even preaching righteousness anyways. See my other posts like deprogramming yourself if you need some help getting started.