Today we are going to learn about a man from ancient history named Constantine. What did Constantine do? A lot. Constantine was a Roman Emperor from 306 to 337 AD. This is a man who certainly changed the world to this day. You are no doubt familiar with his work. Maybe you are not sharp on your Roman Emperor history but if you live in the United States you are most certainly familiar with his work. We need to discuss it.

The Edict of Milan (Italian: Editto di Milano, Latin: Edictum Mediolanense) was the February 313 AD agreement to treat Christians benevolently within the Roman Empire.[1] Western Roman Emperor Constantine I, and Licinius, who controlled the Balkans, met in Milan and among other things, agreed to change policies towards Christians[1] following the Edict of Toleration by Galerius issued two years earlier in Serdica. The Edict of Milan gave Christianity a legal status, but did not make Christianity the official religion of the Roman empire until Emperor Theodosius I did so in 380 AD. – Edict of Milan Wikipedia Page

Understand that before the Edict of Milan there were Roman Emperors like Nero, Domitian, Trajan, Decius and Valerian who all persecuted Christians to varying degrees. There are some details in this Wikipedia page entitled Anti-Christian Policies in the Roman Empire. Some of these persecutions included imprisonment, torture, feeding Christians to lions and lighting them on fire like human torches. The year 300 AD was not a safe time to walk around the streets of Rome preaching the good news of Jesus. It was Constantine who put in policy to protect the Christians from physical harm. But at what cost? Good question.

Prior to Constantine things were more “authentic”. What things could those be? Well first and foremost it must be noted that Jesus and the apostles were Jews. They celebrated Jewish feast days tracked by the Hebrew Calendar (which is different than the Julian Calendar you are used to in the United States). The ancient Jewish feast days are outlined in the scripture of the Old Testament. Major feasts include Passover, Feast of Unleavened Bread, Feast of the First Fruits, the Feast of Weeks (Pentecost), the Feast of Trumpets, the Day of Atonement, and the Feast of Booths (Tabernacles or Ingathering). These are outlined in Leviticus 23. Have you ever wondered what holidays Jesus celebrated? He celebrated the ones in this paragraph. Today most Christians celebrate one or two of them – kind of. Have a look at what the Hebrew feast calendar schedule looks like for 2017 …

Are these holidays not very familiar to you? How can that be? How in the world does Christianity which “follows Jesus” not celebrate the same holidays that Jesus and the apostles celebrated? Excellent question. I will answer it for you. The short answer, in one word, is “Constantine”. Constantine the Great? Perhaps not.

One of the most crucial meetings of the last 2000+ years happened way back in 325 AD. About 1700 years ago was held the Council of Nicea. This is the birth of the Easter holiday as we know it today and it basically established the standard for Christmas and Halloween as well. The man behind this meeting was indeed Constantine. It was called to hammer out details of the divinity of Christ as well as establish the date of holidays. From the Council of Nicea comes this quote from Emperor Constantine concerning the Jewish people …

“And truly, in the first place, it seems to everyone a most unworthy thing that we should follow the customs of the Jews in the celebration of this most holy solemnity, who, polluted wretches! having stained their hands with a nefarious crime, are justly blinded in their minds. It is fit, therefore, that rejecting the practice of this people, we should perpetuate to all future ages the celebration of this rite, in a more legitimate order, which we have kept from the first day of our “Lord’s” passion even to the present times. Let us then have nothing in common with the most hostile rabble of the Jews.” – Constantine, Council of Nicea, Page 52

There you have it. Straight from the horse’s mouth. I have written about this quote before in my post Pagan Things. It needed to be written about again. This is truly how the ancient feast days of the God of Abraham were killed off by men to the modern Christian. To review it happened like so. Constantine didn’t like the Jews. He made up new holidays instead. Or did he?

Christians are not killed for sport by lions today or burned alive like human torches because of Constantine. In return all of the major Christian holidays align with the Pagan / Wiccan / Luciferian / Witch / Warlock holiday calendar instead of the ancient feast days of the Lord of Hosts. That is the end result of the Council of Nicea. However I question the whole “Christian tolerance” thing that supposedly Constantine brought about. Try to be a Christian who honors the ancient feast days of the Old Testament AND honors the New Testament. Challenge the modern church on Easter and Christmas and Halloween. See if you come close to getting fed to the lions or being burned alive. Why do you think my website is anonymous? I know what the Witches Wheel of the Year looks like. I am talking about the “official” holiday schedule of real life witches and warlocks. Google images of “witches wheel of the year” if you do not believe me. You will find pictures that look a lot like this … 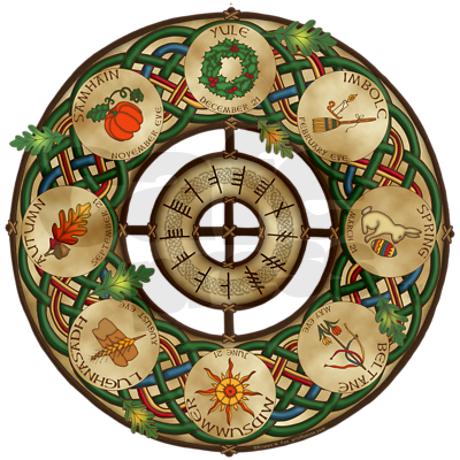 Now maybe you want to be a witch or a warlock. Fine then. Do what thou wilt. Some of us don’t want to. This is me showing you the real holiday calendar of witches. This is you looking at it. Now you tell me if you celebrate the warlock holidays. Not me tell you. You tell me!

Before we move on I need to point this out because it drives me nuts when I hear people say “Jesus is the reason for the season”. Christmas and Easter and Halloween are much older than the years when Jesus walked the earth. Thousands of years older! Constantine new this. He “compromised” the killing of Christians by merging Christian holidays with Witchcraft holidays. Plus he hated the Jews. That is kind of a problem when the God of Abraham is Jewish and Jesus is Jewish and the apostles are Jewish. These things are a big deal.

Surely some of you are shouting Colossians 2:16. Ok then. I doubt the author of Colossians 2:16 knew that some day the holiday schedule would be entirely handed over to the witches. But I guess you can claim Colossians 2:16. I showed you the official witch holiday calendar. What more need I do?

I end on this thought. Constantine is not your god. If you are a Christian it is Christ you should be listening to. You are not a “Constantinian” or a “Constantiner”. Most people only know the corrupt Christianity this man put in place 1700 years ago. Few have the guts to correct it or even try. We live in a sad state of affairs.